The Winning Essay for the 2018 Freedom Scholarship 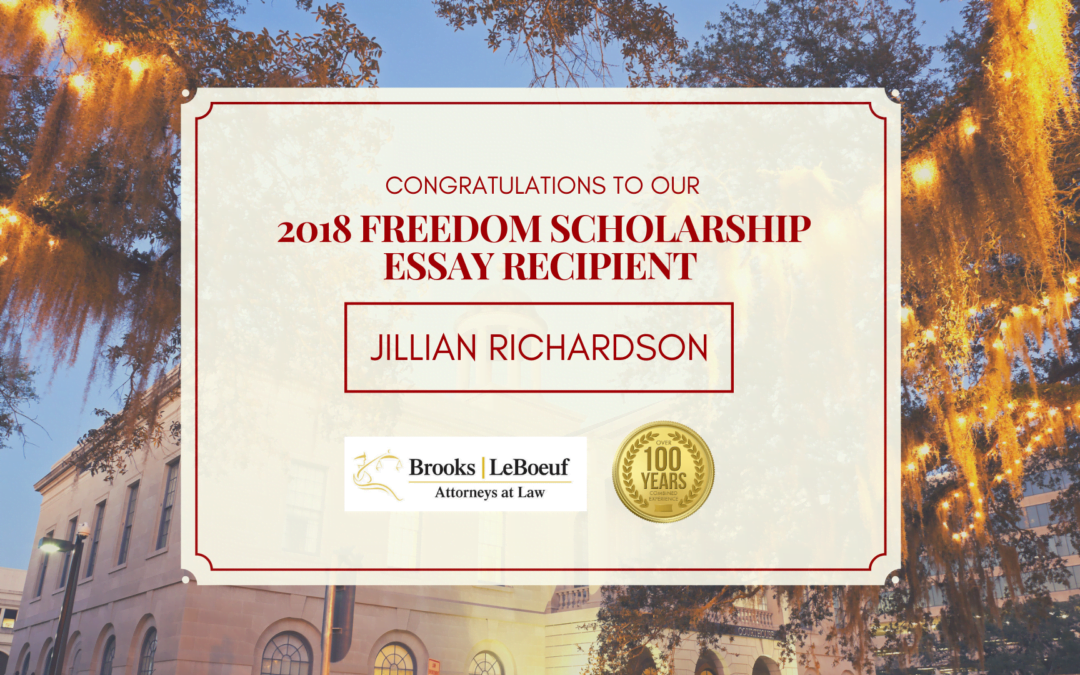 The Winning Essay for the 2018 Freedom Scholarship

As someone who has lived in America for my entire life, it is difficult to imagine what life would be like without the Bill of Rights. The freedoms guaranteed in the Bill of Rights are integral to our society, and it’s absurd to think that other societies function without these freedoms. It is easy to take freedoms for granted when I’ve known nothing else, but it is important to reflect on the wisdom of our Founding Fathers to truly appreciate what it means to be an American. In my mind, no freedoms could ever be more important than those offered by the First Amendment. This amendment allows people to say or be what they want without fear of persecution.

Freedom of speech allows citizens to voice our concerns. Without this right, I would have no way to impact political outcomes. I could never have any choice in decisions that change my life. Many people think they cannot make any impact on political decisions, but they should look at dictatorships where the people are not given the right to even say their opinions. If elections or legislative decisions do not go the way you wanted, this is not a failure of democracy. In fact, it is an affirmation of democracy. It simply means that the majority of Americans disagreed with you. It is important to appreciate that even if you’re not getting the outcome you would like, it is what was chosen by our people as a whole. A democracy runs by the group collectively making decisions, and this could never happen if Americans were not guaranteed freedom of speech.

Another right guaranteed by the First Amendment that is very similar to freedom of speech is freedom of the press. The press is allowed to publish what it believes it should without government intervention. This means that the government cannot control the political ideas of other parties, but more importantly, it means the government can’t withhold information unless they are doing so for national security. As a society, we have decided we deserve the right to information, even if it frames politicians in a negative light. The president cannot stop the press from publishing information that makes him look bad, nor can he make the media publish political propaganda that he supports. This means that when I read the news, I know the information I am getting is not being censored by someone with a political agenda. While different sources may have their own agenda, accurate information can be found because the agenda is not the same for media source as it would be without freedom of the press. As an American, it is my responsibility to seek out credible sources of information and cross check stories for accuracy.

Having uncensored information and saying our opinions are important, but very little political change, if any, can be made if one stands alone. That is why the right to peacefully assemble is such a significant part of the First Amendment. Our elected officials are chosen to represent the voices of American citizens. Large assemblies such as marches or protests held in a peaceful, organized fashion have the ability to provide visual representations of the very constituents they serve. While protests and marches don’t directly change policies, they are often a driving force behind needed changes. The right to assemble is often overlooked, but it is truly necessary for any progress to be made. I recognize how fortunate I am to live in a country that grants me this freedom.

Rights that allow citizens to impact the government are important, but even more important are rights that allow Americans to stay true to what they believe. In America, we can have any or no religion. There is no official religion because we the people are all individuals with different beliefs. No one is forced to give up a part of themselves or forced to live a part of their life in secret. I’m proud of the fact that we, as a country, have found a way to coexist while maintaining our individualism. Whether we’re Christian, Jewish, Buddhist, Muslim, Hindu, or atheist, we are all united by being American. I am extremely grateful that I’m an American and don’t have to give up beliefs that are integral to who I am.

America would not be the country it is without the Bill of Rights. We would not be the ‘land of the free’. There would not be ‘liberty and justice for all’. The phrases ‘land of the oppressed’ and ‘liberty and justice for some’ don’t have quite the same ring to them. The beauty of the Bill of Rights is in its simplicity. It provides both straightforward protection from injustice and a strong path for a redress of grievances for all citizens, no matter their opinions, political party, or religion. Because of the First Amendment, I can voice my thoughts, view uncensored media, peacefully assemble, exercise religious freedom, and speak directly to my representatives.